How EPS bans are already proving to have positive environmental effects

Polystyrene Packaging Laws & Regulations – Legislation banning the use of expanded polystyrene packaging products from within the food industry marks the newest trend within the sustainability movement. And although cities began enacting bans on polystyrene foam packaging years ago, recent years have witnessed significant progress toward prohibiting EPS foam pollution.

Although a multitude of scientific research and case studies already highlight the negative environmental effects of polystyrene, we wanted to investigate the positive ecological impact of recent polystyrene legislation.

Cleaning up the Chesapeake Bay

Montgomery County, Maryland passed an EPS ban in January of 2015, following a report by the Anacostia Watershed Society. Prince George’s County, Maryland enacted a ban of their own, enforced on July 1st, 2016, citing the need to clean up the Chesapeake Bay and protect the beautiful natural landscape along the Atlantic coast.

The polystyrene prohibition in these two major counties illustrate the positive effects of environmental legislation and bring to light the profound impact EPS has on an ecosystem. “We’ve seen little to no styrofoam on the side of the road or in streams,” affirms Adam Ortiz to The Baltimore Sun.

Measuring the environmental pollution of polystyrene can be difficult, as it is practically weightless. But Mr. Trash Wheel, a waste collector in the Baltimore harbor, presents clear-cut evidence of the extent of EPS water pollution. Polystyrene foam represents the second most found trash, behind only cigarette butts, with 735,707 polystyrene containers salvaged from just one section of the harbor.

Brooke Lierman, a Baltimore Democrat, hopes people understand that our “streets are cleaner, our rivers are cleaner, [we’re] not seeing this form of trash, and I don’t even miss it.” In fact, since 2016 when the bans went into effect, “no businesses have come forward seeking exemption, and stream banks have gotten noticeably cleaner,” remarks Ortiz.

The success of the polystyrene bans in the two most populous counties in the state clearly made a real impression, as Maryland became the second state to pass a ban on polystyrene foam products in 2019. And despite a Republic governor sitting this bill out, Maryland’s ban passed with a supermajority in the General Assembly and with support coming from multiple sides.

San Francisco prides itself on being the center of innovation and sustainability. As part of a wider goal to be fully zero waste by 2020, the city passed “the nation’s most extensive ban on Styrofoam” in 2016. San Francisco built off of their earlier ban, adopted in 2007, expanding the reach of the legislation beyond the food packaging industry to include “most every product made of Styrofoam.” 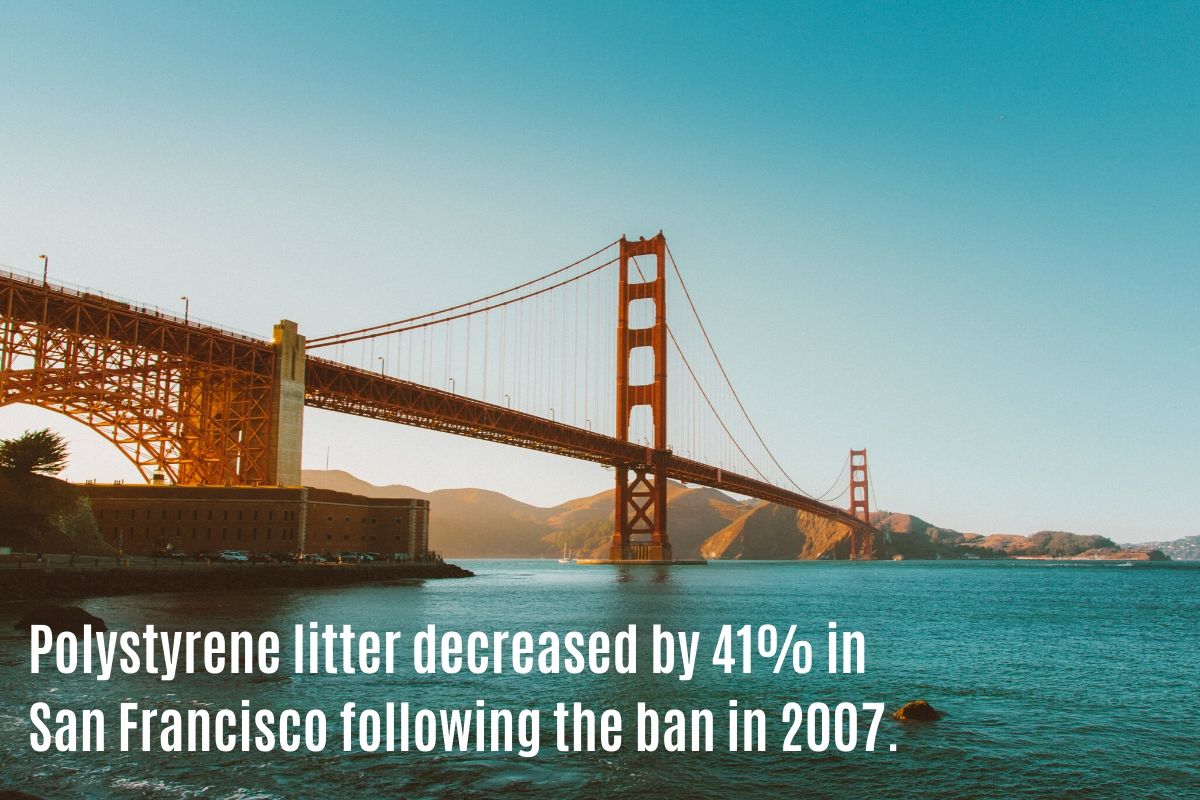 In March 2017, The Center for Sustainable Energy published the Equinox Project, which evaluated the economic and environmental impacts of recent polystyrene policies. Bay Area litter audits in 2007, 2008 and 2009 found a 41% decrease in EPS trash on the streets and a case study in San Leandro revealed a 61% decrease in EPS food container litter. The report concludes, “EPS bans have successfully reduced EPS litter, which reduces cleanup costs and is beneficial for wildlife and the environment.”

On January 1, 2019, Mayor Bill de Blasio proudly announced a city-wide ban on polystyrene food packaging products. “The 60 million pounds of styrofoam New Yorkers throw away each year clog our landfills,” declared de Blasio. “We’re ending this dirty practice so we can ensure a cleaner, fairer future for our children.”

New York City’s ban on polystyrene marks a historic moment as the most populated and most well-known governing body to pass a polystyrene ban. Proponents for the legislation point to the success in other cities and expect cleaner streets, parks and waterways. With bans enacted in New York, Washington, DC, San Diego, San Francisco, Seattle, and Los Angeles County and many more states and municipalities currently debating similar bills – legislation at the national-level seems like only a matter of time. 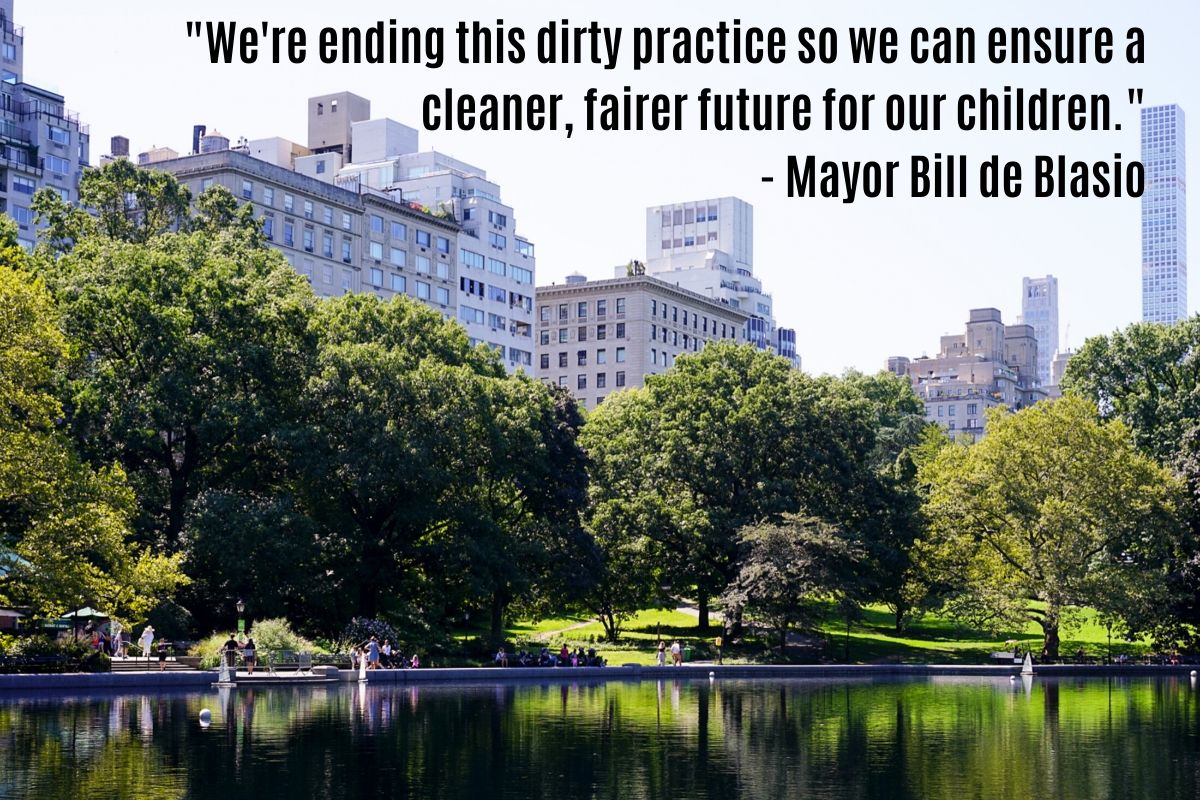 Companies are forced into new solutions and different ways of thinking as a result of changing landscape of the industry. And the market for sustainable alternatives naturally responds, with eco-friendly packaging solutions capable of replacing traditional methodologies.

EPE is a global leader in sustainable packaging, with proven solutions that combine optimized designs, environmentally sound materials, and sustainable processes. By design engineering packaging for specific products, EPE can reduce material usage significantly while improving product protection. Our designs have resulted in the reduction of over 1 billion cubic feet of packaging material.

Don’t fall behind the curve. Make the switch and improve your packaging solutions today.

Talk to one of our packaging experts about how EPE can replace your polystyrene packaging.