The polystyrene manufacturing process has a damaging impact on our environment

Measuring pollution from the EPS manufacturing process – Polystyrene packaging foam directly harms the environment, piling up in landfills, contaminating rivers and oceans, and endangering wildlife. Companies, consumers, and congressional leaders agree that EPS foam represents a serious threat to our natural ecosystem the moment it is discarded. However, the process of manufacturing polystyrene material is a huge contributor to environmental pollution and presents serious human health risks as well.

How the Styrofoam gets made

Polystyrene manufacturing begins by extracting and dehydrating the benzene compound from ethylbenzene to yield a clear, liquid hydrocarbon called styrene. Factories then combine many styrene compounds together in a process called polymerization to create the final result: polystyrene.

Further, styrene and benzene both present serious health problems for workers who manufacture expanded polystyrene foam. “Chronic exposure affects the central nervous system showing symptoms such as depression, headache, fatigue, weakness, and may cause minor effects on kidney function,” reports the US Department of Labor.

Styrene and benzene are also recognized carcinogens. The Department of Health and Human Services (DHHS) conclusively states that benzene directly causes leukemia. Styrene has only recently been linked to cancer, with studies emerging which find evidence of increased DNA damage. In 2016, The National Toxicology Program completed a study proving “increased mortality from or incidence of cancer of the lymphohematopoietic system,” in workers exposed to styrene. The studies showed that employees in polystyrene manufacturing presented higher risks for leukemia and lymphoma.

The manufacturing of polystyrene also presents a serious threat to our environment, primarily through carbon emissions released during the process. In fact, an investigation into the history of Styrofoam manufacturing opens up a trove of dirty secrets. Originally, the manufacturing process for EPS involved chlorofluorocarbons, or CFCs. Nowadays, CFCs are infamous as the carbon emissions that depleted the ozone layer and nearly causing an ecological catastrophe. Fortunately, CFCs were banned internationally decades ago, forcing Styrofoam manufacturers to find replacements. 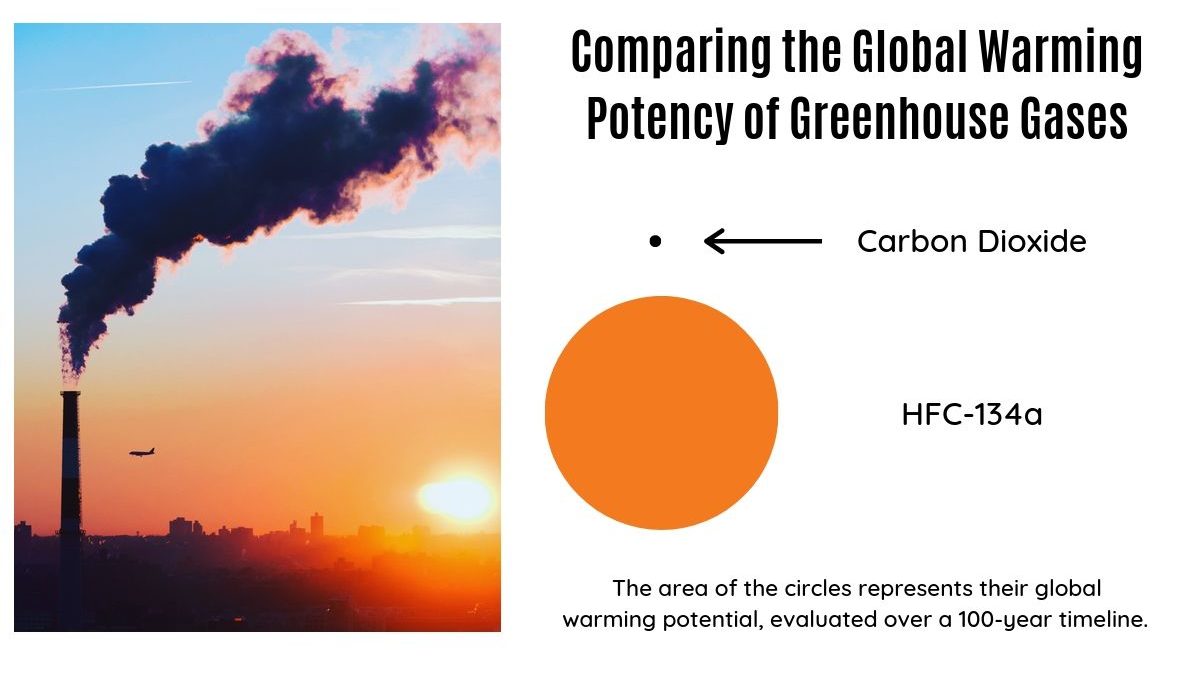 The EPA uses several metrics to assess the potential environmental impact of a greenhouse gas. They measure how long it lasts in the atmosphere, how much infrared radiation it absorbs, and its specific effect based on the wavelength of radiation it captures. They evaluate gases based off of carbon dioxide, which they designate a global warming potential of 1. Methane has a potential of 34. HFCs all range from 1,370 to 4,180. In other words, HFCs absorb thousands of times more heat in our atmosphere than carbon dioxide and have a much more significant potential impact towards climate change.

Effect on our atmosphere

Hydrofluorocarbon concentration in our atmosphere has skyrocketed in the last two decades, contributing significantly to climate change. The IPCC, Intergovernmental Panel on Climate Change, published a report in 2007 which measured the concentration of HFCs in our atmosphere. They evaluated changes since 1998 and analyzed the effects of specific greenhouse gases on radiative forcing – a critical element causing climate change.

The IPCC report illustrates a 349% increase in the radiative forcing impact of HFC-134a, the specific hydrofluorocarbon released during EPS manufacturing. And polystyrene factories continuously emit these dangerous chemicals, which represent one of the most significant contributors to climate change. 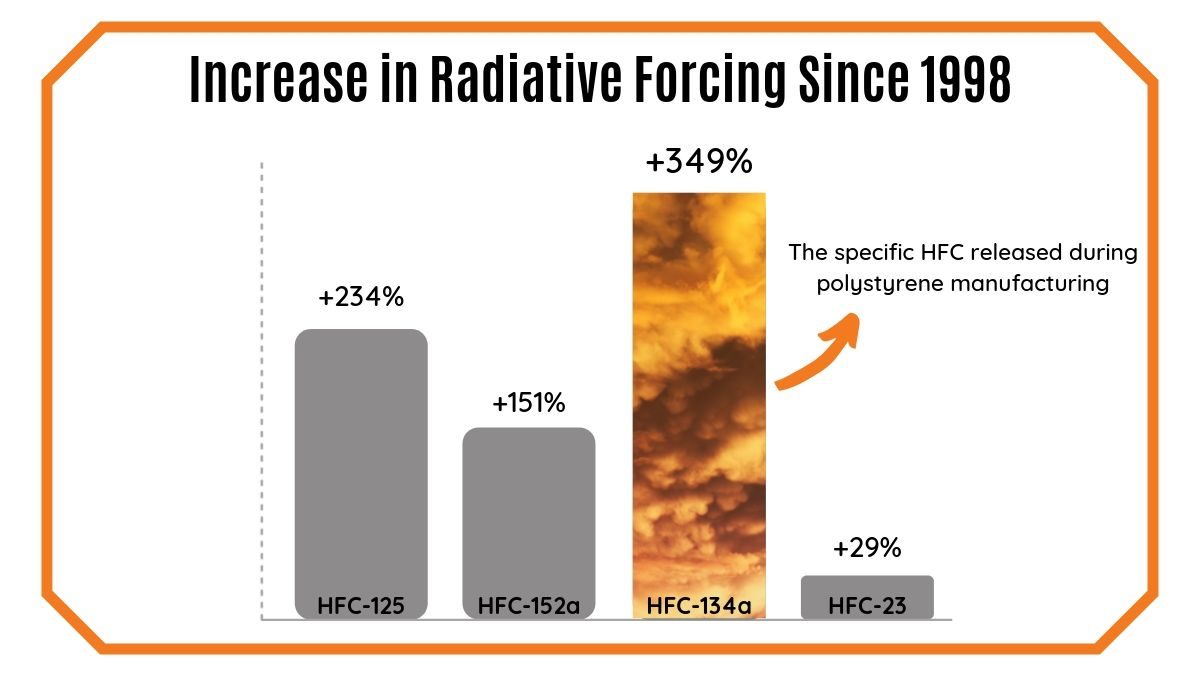 Government organizations have launched efforts to curb the emissions of HFCs, which have been nicknamed “super greenhouse gases” and referred to by Greenpeace as “the worst greenhouse gases you’ve never heard of.”

In 1987, the world came together and ratified the Montreal Protocol, agreeing to quit producing substances known to deplete the ozone layer. Then in October of 2016, the Protocol established an amendment focused on limiting emissions of hydrofluorocarbons. In Kigal, Rwanda, 197 countries “committed to cut production and consumption of HFCs by more than 80 percent over the next 30 years.”

Looking ahead at the future

This marks a remarkable statement by world organizations to limit the emissions of HFCs alongside CFCs, CO2 and other greenhouse gases. Companies in the next few years will have to resort to finding more sustainable manufacturing processes or utilize different materials for their packaging solutions.

EPE plans for the future with a firm commitment to sustainability. We ensure our manufacturing processes and packaging materials are environmentally sound. EPE packaging designs offer alternatives to polystyrene, replacing the toxic chemicals, carbon emissions, and pollution with eco-friendly solutions.

At EPE, we focus on every aspect of the life cycle of a package, from supply to manufacturing to implementation. We engineer innovative packaging designs that reduce material usage and optimize for reusability and recyclability, to prevent waste from entering our environment. EPE remains committed to providing optimized packaging solutions at the lowest possible cost and least environmental impact.

Make the switch. Talk to one of our packaging experts today about replacing EPS packaging with sustainable solutions.