Maryland becomes the second state, after Maine, to prohibit EPS from food packaging.

Maryland bans polystyrene packaging material – In April 2019, Maryland’s State General Assembly voted 100-37 in approval of legislation to ban polystyrene material from food packaging. This followed the Maryland Senate’s successful passing of the bill in March and subsequently added enough pressure for Republican Governor Larry Hogan to let the bill pass without his signature.

The statewide ban of polystyrene packaging material will be enforced starting July 1, 2020. Enforcement falls to county officials, who are licensed to hand out $250 fines. Maryland becomes the second state in the nation to ban polystyrene packaging, with Maine enacting similar legislation this spring as well.

Congresswoman Brooke Lierman (D) spearheaded the effort, emphasizing the environmental importance of legislation against unsustainable materials like polystyrene within the packaging industry. Lierman states, “The health of the Chesapeake Bay, our waterways, our neighborhoods, and our children’s futures depend on our willingness to do the hard work of cleaning the mess that we inherited and created.”

Maryland ranks 10th in the United States in total coastline, with 3,190 miles along the beautiful Chesapeake Bay. Styrofoam represents a large part of the “mess” impacting these marine ecosystems. Approximately 115,000 polystyrene containers swept down Jones Falls in Baltimore last year. That’s in addition to the immeasurable, smaller EPS foam pieces that pollute the water. 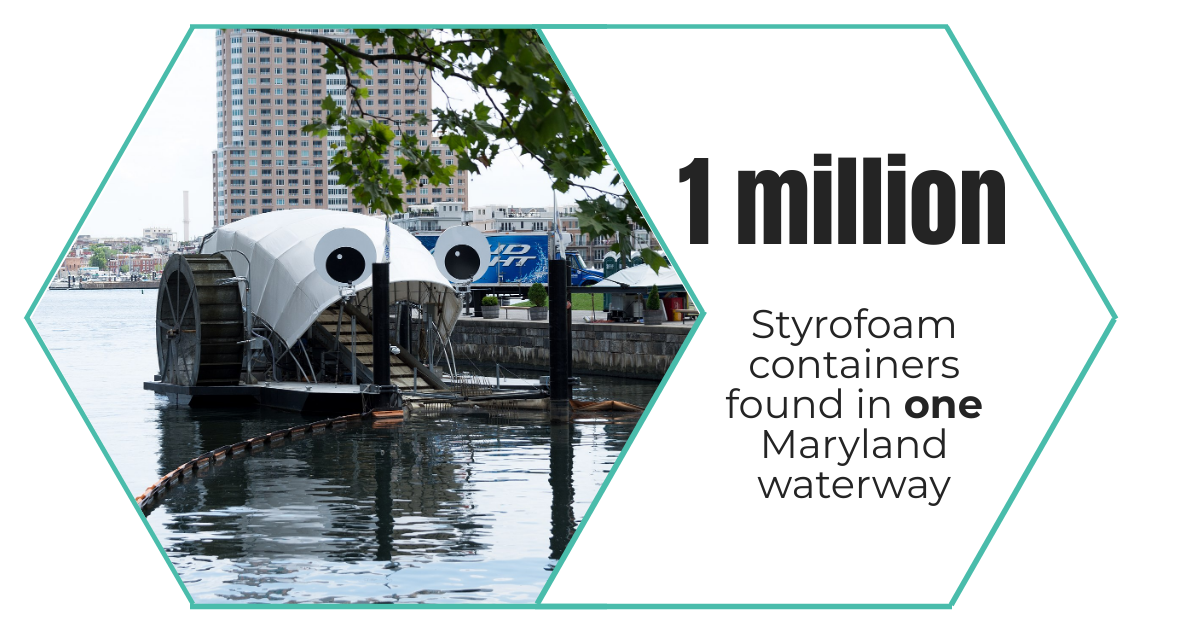 Mr. Trash Wheel (pictured above) is a trash interceptor that sits in Baltimore’s inner harbor, capturing garbage as it flows from Jones Falls River into the city harbor. According to The Waterfront Partnership of Baltimore, more than 1 million Styrofoam containers have been collected by the trash wheel in its 5 years of being active.

That ranks polystyrene second only to cigarette butts in total number of pollutant materials recovered from the stream. Additionally, that amount does not take into account the multitude of microscopic particles that break away from EPS foam packaging and contaminate the waters.

Baltimore doctor Richard Bruno writes about polystyrene and its effect on both human health and the well-being of our environment. He notes that, while EPS foam is so light it only makes up 1% of all waste by weight, it constitutes upwards of “40% of litter found in streams” in Maryland.

Success at the local level

Prince George’s and Montgomery counties within Maryland passed their own local bans on Styrofoam packaging back in 2016 and they both show significant positive results. Since the bills went into effect, “no businesses have come forward seeking exemption, and stream banks have gotten noticeably cleaner,” states Adam Ortiz, an environmental director who worked in Prince George’s and currently works in Montgomery. “We’ve seen little to no Styrofoam on the side of the road or in streams,” he concludes.

Baltimore and Annapolis passed polystyrene bans of their own last year, which will enter into effect this fall of 2019. “People are starting to wake up,” remarks Ashley Van Stone, director of Trash Free Maryland, this is a “huge environmental challenge we need to tackle. The Chesapeake Bay is so integral to our economy.”

Priorities, starting from the top

Environmental legislation to protect the Chesapeake Bay was one of the top priority items at the start of the year for Maryland State Democrats. In January 2019, Maryland Democrats presented their congressional to-do list, which included a plan to ban EPS foam by the end of the year.

“We are seeing viable alternatives that are much safer, that are environmentally friendly,” argues Dereck Davis, who chairs the House Economic Matters Committee. The message is clear from Maryland; for the sake of the environment and the economic value of the Chesapeake Bay, it’s time to make the switch from polystyrene packaging.

A leader in sustainable packaging alternatives

EPE is an industry leader in providing sustainable packaging solutions that can easily replace polystyrene with more optimized designs. We engineer innovative, protective solutions that successfully cut down on material usage by up to 80%. By designing specifically for each unique-sized product and their transit environment, EPE can ensure improved product protection, while removing unnecessary packaging material.

Additionally, we utilize 100% recyclable and reusable materials to ensure that we are limiting our environmental impact with every package shipped. Thus, our designs eliminate the mountains of waste flowing into natural environments, proving to be far more sustainable than traditional polystyrene packaging.

Make the switch. Talk to one of our packaging professionals today about switching from polystyrene material to more environmentally sound packaging solutions.